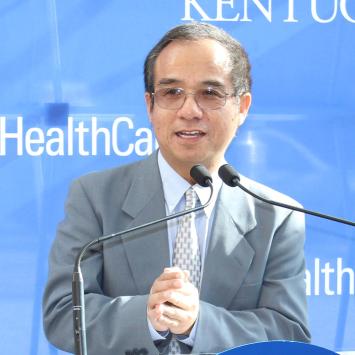 Chang-Guo Zhan received a Ph.D. in Chemistry from University of Notre Dame and a Ph.D. in Science (Molecular Physics) from Institute for Molecular Science (IMS), Japan (Graduate University of Advanced Studies). Dr. Chang-Guo Zhan performed his postdoctoral research as a Postdoctoral Research Scientist at Department of Medicine, Columbia University. After that, he served as Associate Research Scientist at Department of Medicine, Columbia University and a Visiting Scientist at Pacific Northwest National Laboratory at the same time. Dr. Zhan joined the UK College of Pharmacy faculty as Associate Professor on July 1st, 2003 and was promoted to Professor on July 1st, 2007. Dr. Zhan was named the University Research Professor by the University President and Board of Trustee in May 2016.

Dr. Zhan’s main research interest is drug design, discovery, and development through integrated computational-experimental studies. Drugs designed and discovered in Dr. Zhan’s lab are either small molecules (such as inhibitors of enzymes or agonists/antagonists of receptor proteins or DNA-binding molecules etc.) or engineered proteins (mutants with significantly improved biological functions and/or increased circulation time in the body). In order to rationally design a drug, Dr. Zhan’s lab may perform whatever types of molecular modeling (including homology modeling and molecular docking), simulations (e.g. MD and Monte Carlo), calculations (e.g. QM, QM/MM, MM-PBSA, QM/MM-PBSA, FEP, and QM/MM-FEP etc.), statistical analysis (including QSAR and Artificial Neural Network), and molecular design (automated virtual screening and de novo design) that are necessary for a project. The computational design is followed by wet experimental tests (chemical synthesis, site-directed mutagenesis, protein expression, purification, in vitro activity assays, and in vivo tests etc.). These experiments are performed either in Dr. Zhan’s lab or in a close collaboration with internal and/or external experimental laboratories. Dr. Zhan’s unique “structure-and-mechanism-based drug design and discovery” efforts through integrated computational-experimental studies (supported by the NIH, NSF, DoD, and other organizations) have been very productive, leading to exciting discovery of novel, promising therapeutics. Two of the therapeutic agents are in Phase II human clinical trials. One has received the Breakthrough Therapy Designation by the FDA. The members of Dr. Zhan’s lab (including Graduate Students, Postdoctoral Fellows, Scientists, Visiting Scientists, and Visiting Professors) work in an interdisciplinary research environment.

Dr. Zhan has published more than 350 peer-reviewed publications and has had 37 patents or patent filings. He currently serves as an Editorial Board member of multiple journals. He has served as a member of American Association of Pharmaceutical Scientists (AAPS) Fellow Selection Committee, member of National Biotechnology Conference (NBC) programming committee, and Chair of Computational Drug Design Focus Group (CDDFG) of AAPS. He has served as a reviewer of grant proposals for NIH, NSF, DOE, and many other national and international foundations, and won 2005 Emerging Computational Technology Prize, American Chemical Society (ACS) Division of Computers in Chemistry (received during the Fall 2005 ACS meeting, Washington DC, August 28 to September 1, 2005; ACS web page for the prize: http://oldwww.acscomp.org/Awards/emerging2005.html). He was elected the Fellow of American Association of Pharmaceutical Scientists (AAPS) in 2010, and received 2016 AAPS Research Achievement Award in Drug Discovery and Development Interface.